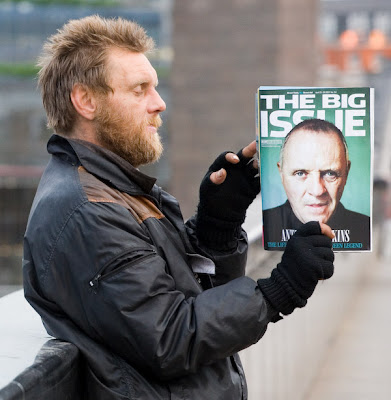 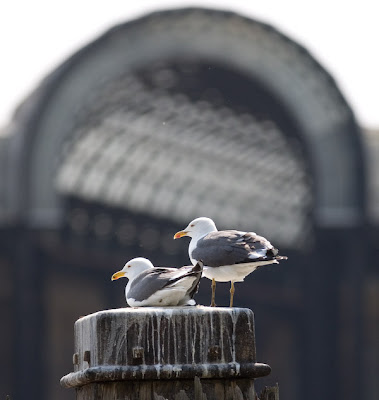 Posted by Cholmondeley at 08:30 0 comments

Not everyone knows that otters are flightless cormorants, but I can't condone this:

Posted by Cholmondeley at 09:53 0 comments 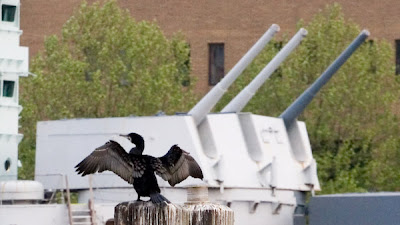 Looking for a shag?

Posted by Cholmondeley at 20:50 0 comments

Thought for the day 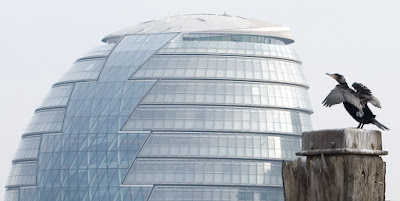 Here I am calling the Mayor to come out and fight.
Is he man or newt?
There's some debate whether a shag is a cormorant. Wikipedia states :

Some modern classifications of the family have divided it into two genera and have tried to attach the name "Cormorant" to one and "Shag" to the other, but this flies in the face of common usage

but a renowned shaggonomer from Itching Abbotts, Hants, writes me that shags are the ones with a Mohican. We, the spiffy species of Phalacrocorax Urbanus, address each other as cormorant or shag depending on mood.

When we're Satanic, it's cormorant as in Paradise Lost: 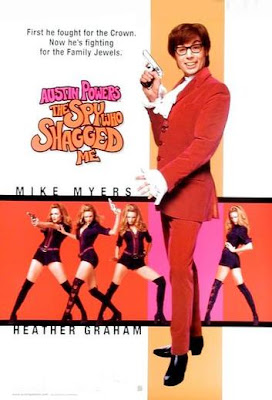 ...up he flew, and on the tree of life,
The middle tree and highest there that grew,
Sat like a cormorant; yet not true life
Thereby regained, but sat devising death
To them who lived

When we're suave, it's shag.

Posted by Cholmondeley at 17:34 0 comments 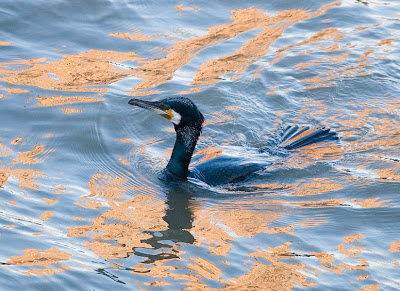 Here I am inspecting the fragments of Tower Bridge's reflection one enchanted evening. Soon I'll have Scarpia and Tosca bellowing at me at sunset. Spare me the shag jokes, I've heard them all.

Posted by Cholmondeley at 19:47 0 comments

The field of blood 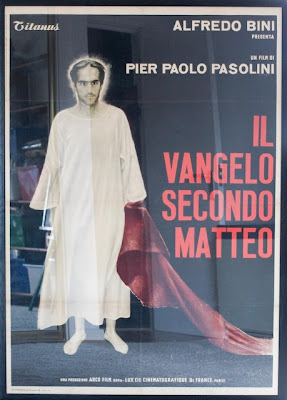 Matt.27
[1] When the morning was come, all the chief priests and elders of the people took counsel against Jesus to put him to death:
[2] And when they had bound him, they led him away, and delivered him to Pontius Pilate the governor.
[3] Then Judas, which had betrayed him, when he saw that he was condemned, repented himself, and brought again the thirty pieces of silver to the chief priests and elders,
[4] Saying, I have sinned in that I have betrayed the innocent blood. And they said, What is that to us? see thou to that.
[5] And he cast down the pieces of silver in the temple, and departed, and went and hanged himself.
[6] And the chief priests took the silver pieces, and said, It is not lawful for to put them into the treasury, because it is the price of blood.
[7] And they took counsel, and bought with them the potter's field, to bury strangers in.
[8] Wherefore that field was called, the field of blood, unto this day.

Posted by Cholmondeley at 19:34 0 comments

A memo from Southwark Noise Czar 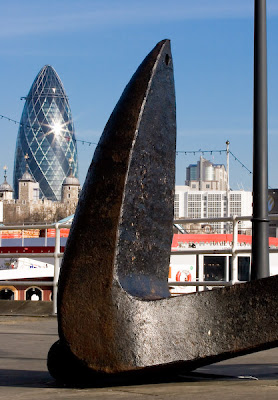 Cormorants need their beauty sleep. It's hard work sunning our wings all afternoon. Potters Fields Trust wants a license for all-night amplified fair-trade yodelling. This memo from Southwark's Noise Czar (pbuh) is reassuring. But, and it's a big but, I suspect the applicants and the GLA want to water it down. Anyway for your edification I present...


Subject
Potters Field Park , Tooley Street SE1
The Noise Team have received many complaints from past events. There are residential properties in the area including the Tower of London. I would ask that the following conditions be considered :-

1. The licensee shall appoint a suitable qualified and experienced noise control consultant, to the approval of the Licensing Authority, as soon as is practical prior to each musical event, or any event that is likely to cause excessive noise. The noise control consultant shall liase between all parties including the Licensee, Promoter, sound system suppliers, sound engineers, and officers 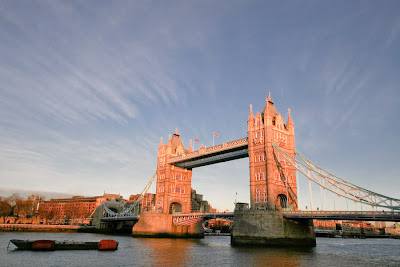 2. The noise control consultant shall carry out a survey to determine the background noise levels (as defined by the Code of Practice on Environmental Noise Control at Concerts) at appropriate locations. This shall include the highest available residential façade to account for free field conditions. The information from this survey to be made available to the licensing authority at least one week prior to any event that is likely to cause excessive noise.

3. A noise propagation test shall be undertaken prior to the performance in order to set appropriate control limits at the sound mixer positions. The sound system(s) shall be configured and operated in a similar manner as intended for the event. The sound source shall be to be similar in character to the music produced during the event.
4. The control limits set at the mixer positions shall be adequate to ensure the Music noise Level shall not at any noise sensitive premises exceed 65 dB(A) at the nearest external facade over a fifteen minute period throughout any rehearsal, sound check or performance. The level will drop to 55dB(A) after 22:30 hours. The Sound Engineer / Consultant shall remain on location throughout the duration of performance, and be in overall control over any artistes’ dedicated Sound Engineers.

5. The Licensee shall ensure that the promoter, and all sound engineers are informed of the sound control limits and that instructions from the noise control consultant regarding noise levels are implemented.

6. The noise control consultant shall, at 45 minute intervals, monitor the noise levels at the designated positions and advise the sound engineer accordingly to ensure that the noise limits and Trading Standards Division shall have access to the results of the noise monitoring .

7. The Licensee shall ensure that all requests from the noise consultant and Noise Team officers and complied with. 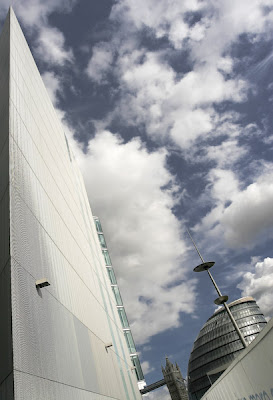 9.Announcements to be made at the end of each evenings entertainment asking patrons to leave quietly.

10. Details of a telephone number permanently manned during performances to be made available to the Noise Team prior to the event.

11. At least two weeks prior to the event a leaflet drop is to be made to households in surrounding premises nearby. The addresses notified must be supplied to the Licensing and Noise Team, and the leaflet to include the date and times of performances, a description of each performance, and a contact telephone number.

12. The performers likely to be noisiest such as pop groups, singers, bands and choirs etc. shall be scheduled to perform so as to avoid the most sensitive times of late evenings and all day Sunday.

13. Music must cease at the specified time on the licence.

14. No separate sound / music system shall be operated within the application site except those specified in the applicant Licence.

15. The hours in which an event shall take place, will be negotiated between the applicant, the Licensing Unit & the Noise Team.

Posted by Cholmondeley at 15:39 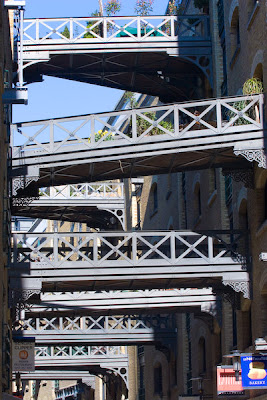 Potters Fields Trust has applied to Southwark for a public entertainment and alcohol license. It's for up to 5,000 people, for any sort of concert, boxing, wrestling, bearbaiting, adult entertainment, infantile entertainment, political demonstrations (I kid you not), Special Olympics Head-Trampolining. You name it, they can do it. They didn't waste their money with Stephen Cornford, PFT's Panjandrum. So mild, so respectable, so English, so honourable. I trust him. So what's to squawk about?
Well, as ChairAvian of the Residents' Association I attended a Southwark Licensing Committee informal conciliation meeting. Naturally the meeting was held in a small room in council offices in Walworth, 3 hours waddle from Potters Fields. Naturally it was at 10am when I should be fishing whereas the applicants and their experts were all being paid (by me in the case of the GLA. You think cormorants don't pay tax?). Naturally the only late arrivals were the private events company travelling from Bermondsey Street. Anyhoot alongside the avuncular, Trustworthy Mr Cornford of Potters Fields Trust was a handsome nu-Labourish young man in £100 jeans and a smart jacket who is I think some kind of aide to Ken Livingstone. There was a political air about him, but 2 things made my feathers sparkle with static. First he said the GLA views Potters Fields like Trafalgar Square. Second he sought to erase the decibel limits wanted by Southwark's Noise Czar (pbuh) by appointing a firm of consultants to report back after a year. Ye gods! Make a noise, ask someone to stand in Shad Thames, did you hear it? No, fine. Yes, turn it down. Call me a suspicious old bird, but I think the Mayor wants to use Potters Fields for his own propaganda and his favoured causes, which used to be the IRA and now embrace Islamism. Mayor of LondON, we are LondONErs, who dreams this stuff up ? Probably someone in £100 jeans.

Posted by Cholmondeley at 15:00 0 comments 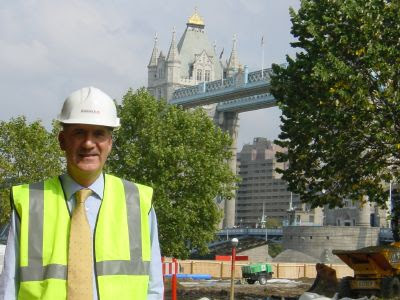 This grumpy old cormorant (me, not him) trusts the estimable Stephen Cornford, Panjandrum of Potters Fields Park Management Trust (that's him, not me). But I'd trust him more if he owned up what he's done with the missing apostrophe.

What a crummy photo.

Posted by Cholmondeley at 14:41 0 comments 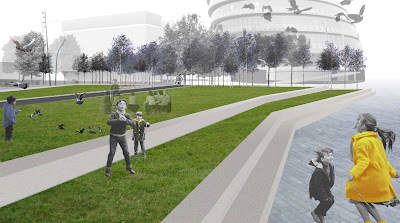 we want to ensure that the standards of cleanliness experienced by employees, visitors and residents will be comparable to the very best London business districts (such as the City of London), with zero tolerance given to street rubbish..

I emailed these photos to More London (we have agents disguised as PolicePersons; you can tell them by ripping off their shoes to reveal their webbed feet; try it, you'll win a prize). Less is More, so no reply, but a few days later More's bins had gone and a little bird told me that terrorism was one of More's motives to bin the bins. Well I know I can be cawstic, but... Anyhoot (geddit) I expect the terrorists are deterrred by the long climb from Queen's Walk to the vast herds of bins in Potters Fields. And even if they survived the climb, there's no space left to bin the bomb. 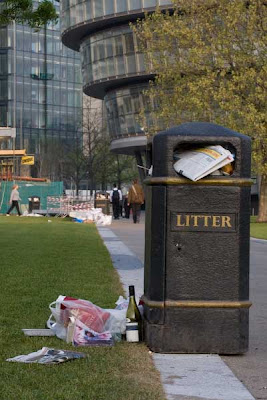 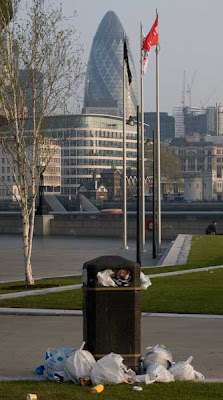 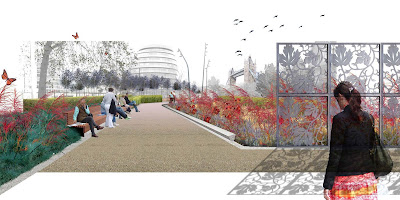 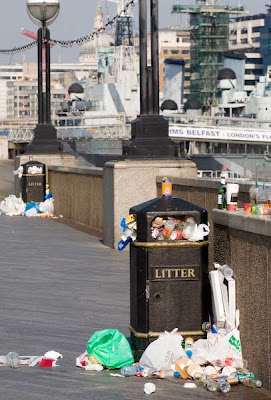 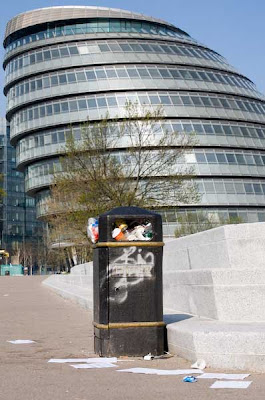 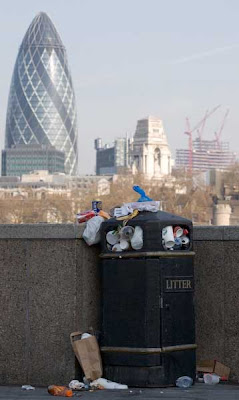 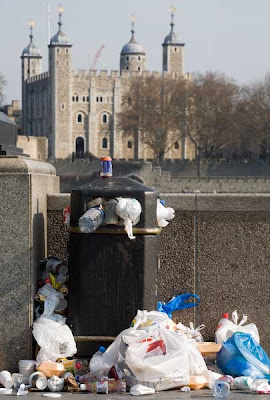 Posted by Cholmondeley at 13:17 1 comments